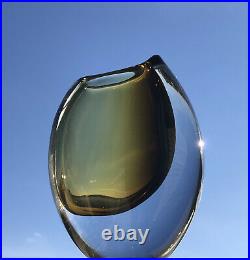 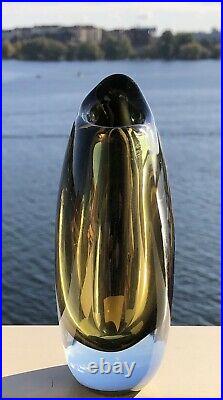 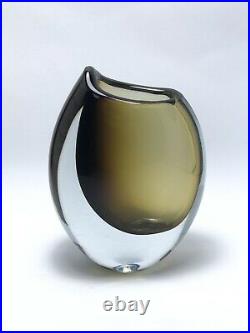 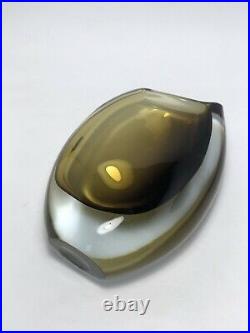 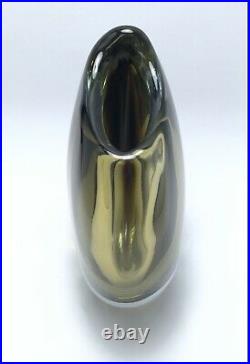 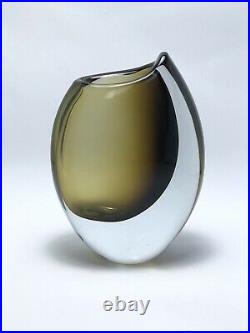 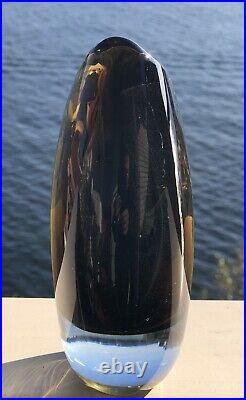 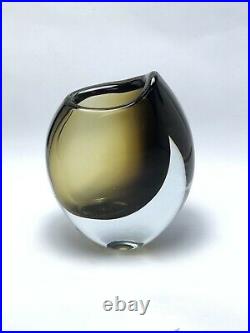 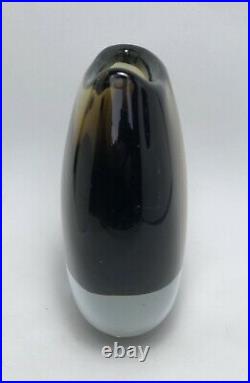 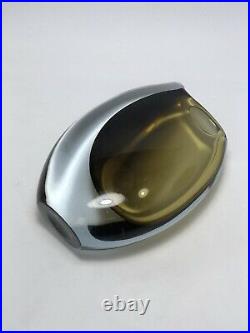 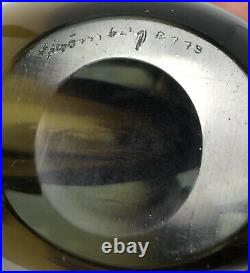 Signed Shark Tooth GUNNAR NYLUND ORREFORS / STROMBERGSHYTTAN Vase Glass, H 6-7, 1950’s. EXCELLENT CONDITION, only some scratches / marks. Measure: H 6 1/4 (16 cm). Signed: Strömberg B 773. (Later on part of ORREFORS SWEDEN GROUP). Strömbergshyttan’s glassworks was named in 1933 after the mill manager Edvard Strömberg, but the glassworks had been founded as early as 1876 under the name Lindefors glassworks. Lindefors Glasbruk was founded by the wealthy Member of Parliament Johan August Sjö from Linneryd and the owner of Lindeskruv’s farm John Lindqvist, with Sjö as inspector. Lindefors was operated periodically and partly in collaboration with the Bergdala glassworks, which was also owned by Alfred Sjö. It was the glass grinder Axel Träff, educated at Kosta glassworks, who bought Lindefors in 1925 and who in 1929 started the operation in partnership with the glassblower. Knut Bergqvist and his nephew Eugen. Both of these came from Orrefors and Knut became Lindeforsbruk’s designer, in addition to being a blower and cab master. During the financially difficult period of the 1930s, however, operations were forced to close down in 1931. The same crisis hit Eda glassworks in 1933, where Edvard Strömberg was managing director. When they had been forced to close down operations at Eda, Edvard Strömberg moved back to Småland and Lindefors in the summer of 1933. Together with his wife, designer Gerda Strömberg, he restarted Lindefors glassworks. They leased it and gave it the name Strömbergshyttan and later also became the owner of the mill. Edvard Strömberg also succeeded in re-employing the master glassblower Knut Bergqvist, whom he knew well from the years 1918 to 1927, when they had both worked at Orrefors glassworks. Strömberg also supplemented the workforce at his new glassworks with about ten glass workers from Eda. Now they had a solid foundation to stand on with Edvard Strömberg as leader and his wife Gerda as designer and with skilled glassblowers and grinders from both Småland’s and Värmland’s glass centers. At Strömbergshyttan, she further consolidated her position as one of the great designers in Swedish glass during the 1930s and 1940s. After Edvard Strömberg’s death in 1946, the management of the mill was taken over entirely by his son, the civil engineer Erik Strömberg. After his death in 1960, his wife Asta was given full responsibility for the management of the mill and she also made a name for herself as a designer during the mill’s last 20-year period. During the period from 1954 to 1967, Gunnar Nylund was also active as a designer at Strömbergshyttan. He was mainly known as a designer for Rörstrand’s Porcelain Factory 1931-67 and at a young age worked at Bing & Grøndahl 1925-28. Other designers during the mill’s later years were Rune Strand, 1963-68, and Anders Solfors. In the summer of 1979, the operation was definitively closed down at Strömbergshyttan’s glassworks, after it had been run by the Orrefors Group after a bankruptcy in 1976. The item “Signed Shark Tooth GUNNAR NYLUND ORREFORS / STROMBERGSHYTTAN Vase Glass, H 6-7″ is in sale since Thursday, October 28, 2021. This item is in the category “Pottery & Glass\Decorative Pottery & Glassware\Vases”. The seller is “aiae97″ and is located in Bromma, Stockholm. This item can be shipped worldwide.